Covering 2500 km2 during the dry season, but reaching 12 000 km2 at the height of the floods, the Tonle Sap is the largest freshwater lake in Southeast Asia. A unique hydrological phenomenon, resulting from the link with the Mekong, causes seasonal flooding of a vast floodplain around the lake and its particular vegetation, usually called “flooded forest”.

UNESCO listed the Tonle Sap on the list of Biosphere Reserves in 1997 because of its outstanding ecological, economic, social and cultural value.

The Tonle Sap is one of the world’s largest freshwater fisheries (annual catches of 300 000 tonnes). It is also home to the largest colony of water birds in the region and is home to the world’s largest snake harvest (five million a year!), Mainly to serve as snacks for farmed crocodiles. Three million Cambodians depend directly on the lake’s resources, fish providing 70% of their protein intake.

In October 2015, Prek Toal was designated a Ramsar site because of its global importance for conservation.

Prek Toal flooded forest has been designated a core area (21,000 ha) of the UNESCO Biosphere Reserve because of its botanical diversity and its threatened water bird colonies.

In addition, in 2015, Prek Toal was included in the list of Ramsar sites, protecting wetlands of international importance.

Beyond these local threats, the hydroelectric dams under construction on the Mekong significantly disrupt the hydrological cycle of the lake, while many projects on the Lower Mekong block fish migration and nutrient circulation. This could lead to massive depletion of the biological productivity of the lake and lead to a major food crisis in Cambodia.

Through its interventions and approach, Osmose tackles these threats at the local level by initiating changes in natural resource exploitation patterns and supporting alternative livelihoods to fisheries. Osmose’s actions are aimed at reducing the dependence of local populations on the decline of natural resources while instilling an awareness of the ecological issues and threats weighing on the Tonle Sap Lake.

The Prek Toal flooded forest is the last breeding site for a series of large waterbirds throughout Southeast Asia. It is an internationally important refuge for the Spot-billed Pelican, Milky Stork and Painted Stork, Greater and Lesser Adjutant and Black-headed Ibis, all of which are globally threatened species. These species nest in dense colonies throughout the reserve between October and June. In addition, the sanctuary is also home to the Grey-headed Fish-eagle and the very rare and enigmatic Masked finfoot.

The colonies, discovered in 1994, were then seriously threatened by a massive collection of eggs and chicks. In 1996, an estimated 26,000 eggs and 3,000 chicks were collected. They were resold in the floating villages as a delicacy and a change of the daily fish. Since 2001, a team of forest rangers, consisting of villagers including former poachers, has been set up by the Wildlife Conservation Society (WCS) with the support of Osmose. This conservation team ensures the protection of colonies throughout the reproductive cycle and since then the numbers have increased dramatically.

We selected 9 iconic birds from the Prek Toal Reserve.
All are threatened species. 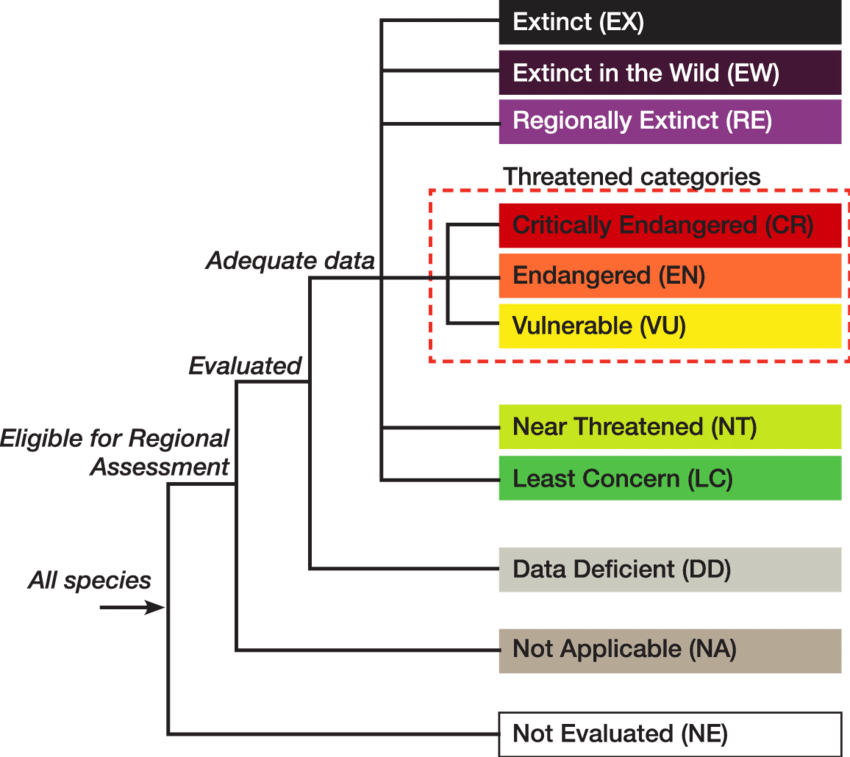 The Greater Adjutant is the largest stork species. It is 145 -150 cm in height with a wingspan of around 2.5 meters. Its diet is varied, feeding on frogs, reptiles, fish, crustaceans, large insects, as well as young mammals and birds. It is also a scavenger, eating carrion. With a global population of 800-1,000 mature individuals and 150-200 pairs live in Prek Toal, Greater Adjutant is the rarest stork in the world. It is declining and for this reason it is classified as Globally Endangered and classified as an Endangered species under Cambodian Law (BirdLife International 2015). The population of Prek Toal is equal to or greater than the size of the population in Assam (India). Together these two populations make up 90% of the global population. 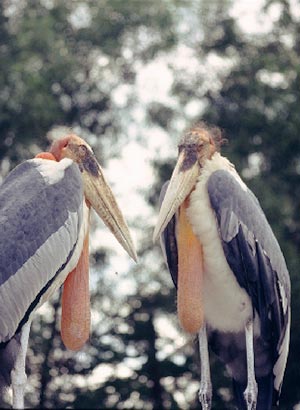 The Lesser Adjutant is a large stork at 120 -130 cm in height with a wingspan of over two meters. It has a similar diet to the closely related Greater Adjutant. The global population is estimated at around 5,500-10,000 mature individuals and declining. For this reason it is classified as Globally Vulnerable (BirdLife International 2015).
Population trend in Prek Toal:
Over the last ten years the Lesser Adjutant population at Prek Toal has grown slowly. However, 2014 was a remarkable year as a total of 395 nests were recorded. 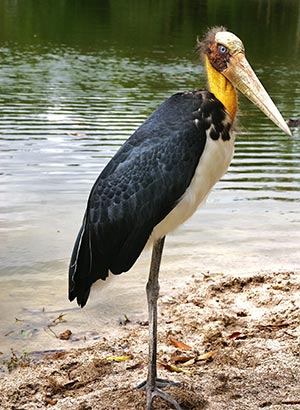 The Painted Stork is 95 -100 cm height. Its diet is varied, feeding on frogs, reptiles, fish, crustaceans and large insects. It occupies mainland Southeast Asia and the Indian Subcontinent. The global population is estimated at around 10,000-17,000 and declining, and it is therefore classified as Globally Near Threatened (BirdLife International 2015). In 2014, the number of visible nest trees were decreasing, at 368 compared to 479 in 2012. 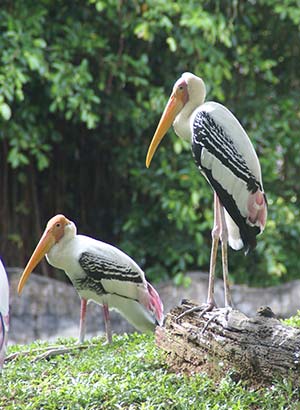 The Milky Stork is very closely related to the Painted Stork. It is 92-97 cm high. Their diet is varied, feeding on crustaceans, amphibians, fish, reptiles and large insects. Most of the global population of Milky Stork is found on the coast of Sumatra and Java (Indonesia). Prek Toal is the only location in mainland Southeast Asia where the species breed. The global population of the Milky Stork is estimated at around 1,500 mature individuals. Due to accelerating declines the species was recently up listed to Globally Endangered (BirdLife International 2015).
Population trend in Prek Toal:
The Milky Stork shows no clear long-term population trends. However it is noteworthy that since 2012 the population, and number of trees on which it has been found nesting, is approximately half that recorded in 2010 and 2011. However, there was a slight improvement in the number of nests recorded in 2014. 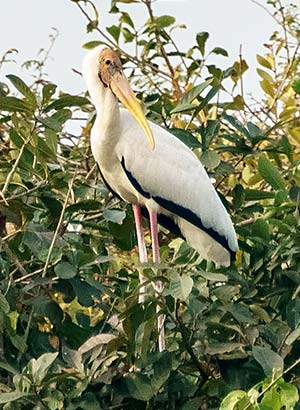 The Asian Openbill is a relatively small stork at just 70-80 cm high. The bill of this bird is specially adapted to efficiently open a snail’s shell. The global population is thought to be large, and it is thought to be stable or even increasing globalIy. It is therefore listed as Globally Least Concern (BirdLife International 2015).

Population trend in Prek Toal:
Numbers of recorded Asian Openbill nests increased from 688 in 2004 to 13,845 in 2010 and have since stabilized around this figure. Along with Oriental Darter, Asian Openbill has shown the most dramatic increase in number of breeding pairs since monitoring began. 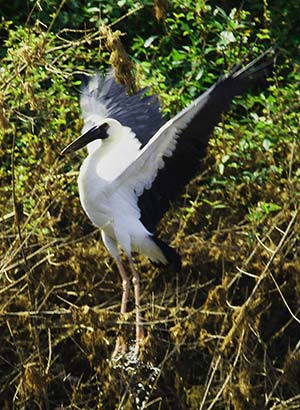 Spot-billed Pelican is a large water bird, 127-140 cm in length. Due to their unique bills and feeding method, the diet of pelicans is restricted almost exclusively to fish. It is found in the Indian Subcontinent and Southeast Asia. In the latter it breeds only at Prek Toal. The global population estimated as around 8,700-12,000 mature individuals and declining, it is therefore classified as Globally Near Threatened (BirdLife international 2015).

Population trend in Prek Toal:
Spot-billed Pelicans typically breed when the water level is relatively high. They are sensitive to disturbance, and usually arrive in the core area at least one month in advance of breeding. The number of Spot-billed Pelican nests recorded in 2014 was 1,803, it’s the highest on record. 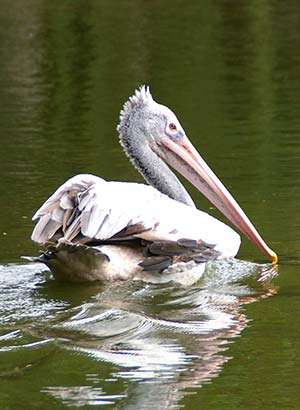 The Oriental Darter is relatively large, reaching 85 -97 cm. Their diet is almost exclusively fish, which are caught by diving through the surface of the water. Oriental Darters are found throughout the Indian Subcontinent and Southeast Asia. The global population is estimated at 22,000 mature individuals. It is declining over most of its range and is therefore classified as Globally Near Threatened (BirdLife International 2015).

Population trend in Prek Toal:
Of all the waterbirds breeding at Prek Toal, Oriental Darters breed the earliest, and although this means that the threat from human disturbance is in theory highest, the colonies are tightly aggregated and can be efficiently protected and counted by the rangers. 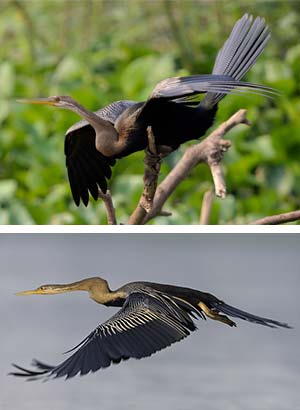 In Prek Toal the Globally Near Threatened Black-headed Ibis tends to breed low down, deep in the scrub. Their nests are rarely visible from the platforms.

In 2014, we counted 13 nesting trees, 99 nests, 313 chicks. For the reasons stated above, this is not an accurate measure of the population. 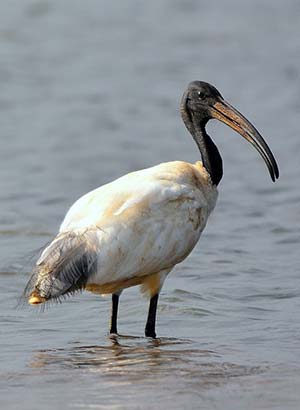 The Grey-headed Fish Eagle is a Globally Near Threatened species that is scarce throughout Southeast Asia and the Indian Subcontinent. It is closely tied to freshwater wetlands. There were 40 breeding pairs in 2014. 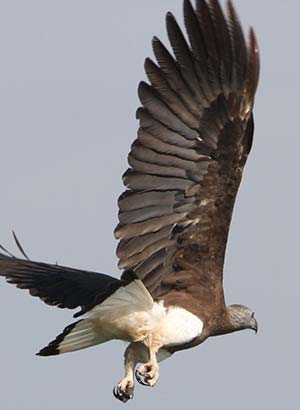 Made with passion by Cruise Sec Production